RICHARD KLEIN is an artist, curator, and writer. As an artist, he has exhibited widely, including the Neuberger Museum of Art at SUNY Purchase, Caren Golden Fine Art, New York, the John Michael Kohler Arts Center, Sheboygan, WI, Hales Gallery, London, Gavlak Gallery, Palm Beach, FL, Portland Institute of Contemporary Art, Portland, OR, and the Tufts University Art Gallery, Medford, MA. His work is included in numerous public and private collections, including the Norton Family Collection, Santa Monica, CA, the DeCordova Sculpture Park and Museum, Lincoln, MA, and the Connecticut Artists Collection (State of Connecticut), Hartford, CT. Since 1999 he has been exhibitions director of The Aldrich Contemporary Art Museum in Ridgefield, CT. In his sixteen year career as a curator of contemporary art he has organized over 80 exhibitions, including solo shows of the work of Roy Lichtenstein, Janine Antoni, Sol LeWitt, Mark Dion, Michael Joo, Hank Willis Thomas, Brad Kahlhamer, Roy McMakin, Mary Temple, Jessica Stockholder, Tom Sachs, and Elana Herzog. Major curatorial projects at The Aldrich have included Fred Wilson: Black Like Me (2006), Elizabeth Peyton: Portrait of an Artist (2008) and Shimon Attie: MetroPAL.IS. (2011). His essays on art and culture have appeared in Cabinet Magazine and have been included in books published by Hatje Cantz, Damiani, Picturebox, and the University of Chicago Press, among others. In November of 2014 he exhibited his work at Aberson Exhibits in Tulsa, Oklahoma in connection with a panel discussion based on the book Living and Sustaining a Creative Life published in 2013. Klein was one of the contributing essayists for the book. His solo exhibition titled, “Bottle in the River” was at the Brattleboro Museum and Art Center in 2018. 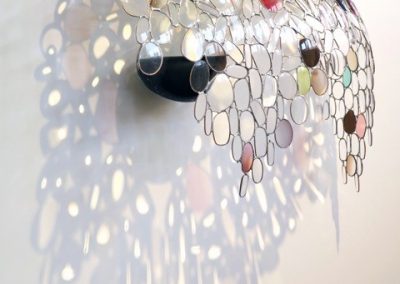 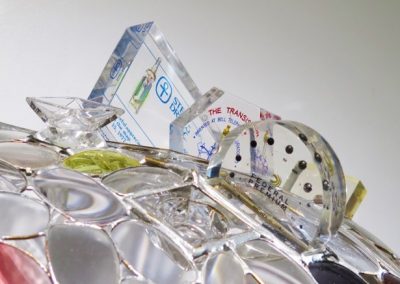 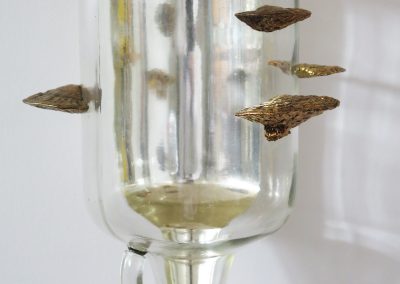 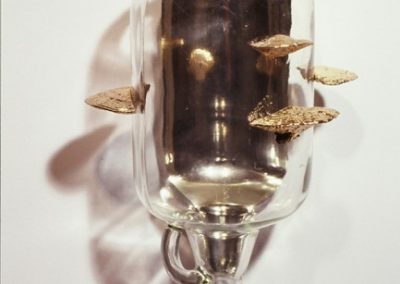 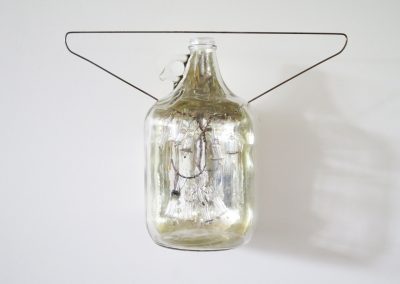 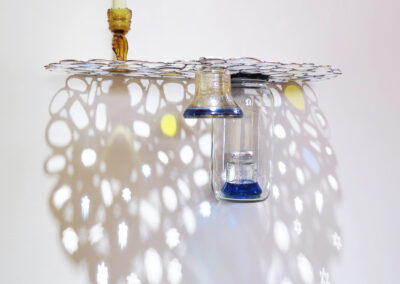 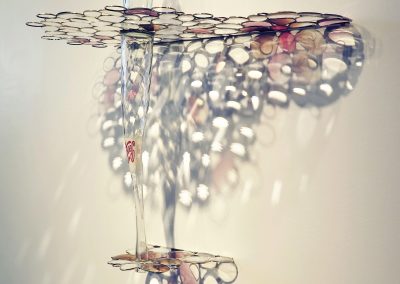 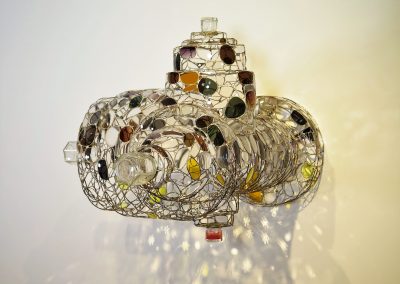 RICHARD KLEIN’s “whimsey bottles” are based on a ninetieth and early twentieth century folk art tradition that was particularly strong on the eastern end of Long Island and on Cape Cod. The writer and art critic B.H. Friedman, a novelist and art critic who wrote the first biography of Jackson Pollock and who was active in Provincetown’s fledgling Fine Arts Work Center, extensively collected them and gave his collection to the Folk Art Museum in New York.

Friedman wrote, ‘Most familiar in the form of a ship-in-a-bottle, whimsey bottles were actually created in a variety of motifs, created mostly by those in isolated, confined or alienated situations, like sailors, farmers, prisoners or lumbermen. Because they required so much time and focus, whimsey bottles were usually made to help pass the time or allay loneliness, or to distract the mind. They offered demonstrations of skill and tokens of affection for those returning home.

Alcoholics and the chronically ill also created those whimseys which were almost always made from liquor or over-the-counter medicine bottles. The original contents killed pain, loneliness or time, the creation of what replaced the liquids may have served the same function. Sometimes after the constructions were finished the bottles were refilled with water to simulate alcohol.

Created with patience and skill, the bottles themselves were never altered. What was wider than the mouth of the bottle had to be folded outside the bottle and opened inside, or glued, hinged or assembled once inside, using tweezers, scalpels, pliers and probes. Except for the bottle-in-a-ship whimsies, these bottles stand upright.’